Spring is rapidly approaching, and field work will soon begin in Kentucky with spring weed control practices taking front stage. This year our farmers are facing the additional challenge of herbicide shortages.

In many cases farmers may have to make difficult decisions about when and where to use the limited supply of product available to them. A comprehensive list of options for spring burndowns with considerations of herbicide shortages was included in the January 2022 Corn and Soybean Newsletter.

The goal in this article is to follow up with specific recommendations for two of our more problematic winter annuals in Kentucky.

This weed is a well-known pest in Kentucky wheat, but the number of complaints of failed burndowns on annual ryegrass in corn and soybean is on the rise. The number one call received in the spring of 2021 was about burndown failures on ryegrass. This weed is no longer just a wheat problem for Kentucky it is a problem in all row crops.

Annual ryegrass emerges in the fall, rapidly grows into the late fall putting on a couple of tillers, then continues to grow in the early spring. Annual ryegrass is one of the first weeds to green up in late winter and will begin rapid growth in March and early April. The key for successful annual ryegrass burndown is all about timing.

Successful annual ryegrass burndowns occur in the window when the following three conditions are occurring at the same time: 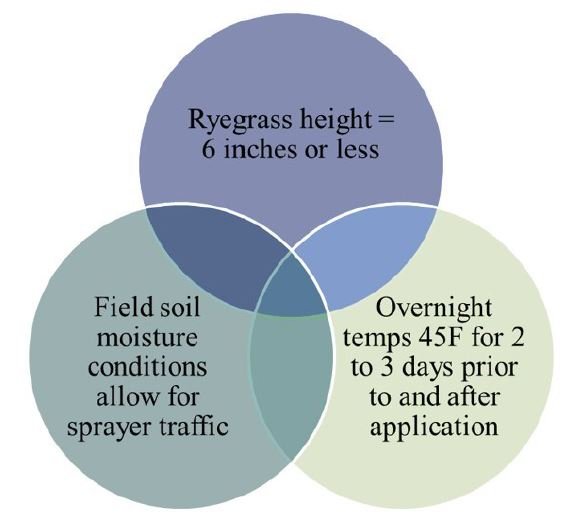 This window capturing both the correct growth stage and air temperatures can be difficult to find, espe-cially when you also consider that field soil conditions need to be dry enough for sprayer traffic. Although, this year with herbicide shortages it is as critical as ever to hit this window, as resprays may not be possible due to shortages.

In evaluations of spring burndown options for ryegrass control in Kentucky, the following keys stand out:

The additional challenge this year is that one of the products that is at the top of the shortage list is glyphosate. The temptation is to either pull glyphosate out of burndown application or cut the rate of glyphosate. While this strategy may be viable for other burndown scenarios, it is not an option when dealing with Italian (annual) ryegrass.

If there is one place you should prioritize the use of glyphosate in burndown applications, it should be on fields with ryegrass.

For those dealing with ryegrass in corn the temptation is to put the burndown and preemergence herbicide on at the same time prior to corn planting. While that has proven to be successful for the majority of acres and weed species, the inclusion of a pre-emerge herbicide that likely contains atrazine can antagonize the glypho-sate.

In these scenarios a farmer is better suited to apply their burndown without atrazine early in the spring and follow with an at planting application of the atrazine based residual herbicide.

Again, 2022 is the year we want to avoid initial burndown failures, as our respray or rescue options will be extremely limited.

Another culprit that continues to be problematic for Kentucky grain crop growers is marestail or horseweed. Marestail is most troublesome due to its seemingly random emergence patterns. Marestail can emerge in the fall, early spring, late spring, as well as throughout the early summer months. While the majority of our marestail emerges in the fall or in the early spring, the continual emergence into the summer makes this spe-cies especially troublesome for soybean farmers.

The biggest key for marestail management is burndown timing, regardless of what herbicide you are using for your burndown. In 2022, it will be critical that farmers are making applications to small rosette stage marestail to assure efficacy of that application.

The wide range of emergence timing for marestail means every field is likely to have different stages of marestail. Scouting fields now and into early March will be key to identifying fields with fall emerged marestail that need earlier burndowns to achieve optimal marestail control.

Overall, we have found the following burndowns to be most effective for marestail:

In the few cases of a field lacking winter annul grass pressure, the option to eliminate glyphosate from the burn- down should be considered in light of the 2022 shortages. A few burndown mixtures without glypho-sate that have shown high marestail control are:

Another alternative for those fields with low winter annual grass pressure and high broadleaf and marestail pressure is Gramoxone. A mixture of Gramoxone plus metribuzin plus dicamba or 2,4-D has shown to be effective on marestail. The use of Gramoxone also has the additional benefit of controlling small winter annual grasses, which the above non-glyphosate options do not offer.

The recent introduction of Enlist E3 and RR2X-tend/RR2XtendFlex soybean varieties has greatly increased the flexibility of 2,4-D and Dicamba for burndown applications in front of soybean planting for effective marestail control. Farmers using either of these soy-bean systems in fields with marestail are encouraged to take advantage of this flexibility and use these effective growth regulators for spring burndowns.