Planting has progressed rapidly this spring across much of Minnesota and a considerable amount of corn and soybean acres were planted by May 4. Progress has been much faster compared to recent years, thanks to below-average precipitation the last 30 days for much of the state.

The most recent monthly outlook from the National Weather Service Climate Prediction Center indicates drier than normal conditions with below normal temperatures into the first several weeks of May. What does this scenario mean for weed control?

Where preemergence (PRE) herbicides have been applied, timely rainfall after application will allow “activation,” or movement of the herbicide into the weed seed germination zone. “Activation” is essential for effective weed control. One-half inch of rain is typically adequate for activation. From a practical standpoint, there is little difference among PRE herbicides in how much rainfall is required for activation.

If rainfall does not happen in a timely fashion, incorporation with a rotary hoe or harrow may help move some of the herbicide off of the soil surface. Rotary hoes should be operated at a high speed and are most effective at controlling weeds in the white root stage (germinated but not yet emerged).

Dr. Bob Hartzler, Extension Weeds Specialist at Iowa State University, in a recent article (here), discusses some key points regarding the importance of rainfall for effective control with a PRE herbicide.

Importance of of layering PRE herbicides with early planting dates 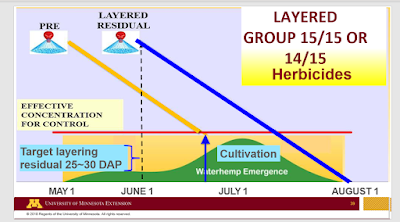 Layering a PRE herbicide, where a PRE residual herbicide is applied at planting and then approximately 30 days later (i.e. Group 15), can enhance control of weeds like waterhemp that have an extended emergence period. With earlier planting dates this year, layering of PRE herbicides can provide even greater benefits to an effective weed management program.

University of MN research conducted in 2015 and 2016 demonstrated the effectiveness of a layered preemergence residual herbicide program on weed control with early planting dates. Although planting occurred early in the season (May 4 and May 5, respectively), POST applications of group 15 residual herbicides were still made 30 days after planting. The goal was to keep an effective concentration of herbicide in the soil to prevent waterhemp emergence.

This study also demonstrated that it was better to layer the herbicides 25-30 days after planting, rather than waiting until 40-45 days after planting. The longer 40-45 day interval allowed some weeds to emerge and escape control. Group 15 herbicides kill weeds before they emerge, below the soil surface, and are ineffective on emerged weeds.

There are more effective postemergence herbicide tools now compared to 2015 and 2016 to help control emerged waterhemp.

If you trust that your postemergence herbicides (Liberty, Enlist, Xtend) will control emerged waterhemp, you may be able to stretch the application window beyond the 30 day recommendation (we waited 42-days in our study). We did this to extend residual control later into July.

In 2015 and 2016, however, we had a closed soybean canopy by early July. The closed canopy provided suppression and “control”of waterhemp that emerged later in the season. Any emerged weeds missed by the postemergence herbicide program were there the rest of the season.

Rainfall is still essential for layered residual herbicides to be effective, so earlier application is preferable in situations where extended-range forecasts may be drier than normal. Otherwise, weeds may germinate and emerge after postemergence applications but before the residual herbicides are “activated.”