Glyphosate-resistant horseweed, or marestail, remains one of the primary weed management challenges in no-till soybean production across the state. Designing effective herbicide control strategies for horseweed is challenging because of its emergence patterns.

Adoption of Xtend (dicamba tolerant) and Enlist (2,4-D tolerant) soybean varieties allows these synthetic-auxin products to be applied up to soybean planting as well as in crop. Though adoption of new soybean trait technologies may lead to cost-effective and more flexible herbicide options for horseweed control, evolution of resistance to synthetic auxin herbicides will likely occur sooner than later unless proactive approaches are developed that integrate other weed control tactics.

Two management scenarios that likely contributed to the evolution and spread of glyphosate-resistant horseweed are worth considering as we think about ways to steward new soybean trait technologies.

And second, delaying horseweed control to just prior to planting likely resulted in the presence of large horseweed individuals that survived pre-plant applications and were exposed again to postemergence applications of glyphosate, which resulted in increased selection for resistance.

With these lessons in mind, we have been focusing on two cover cropping goals for horseweed management to help prevent or slow evolution of resistance to currently effective burndown herbicides.

Fall sown cover crops are actively growing during periods of fall and spring horseweed emergence periods and, due to competition, have the potential to reduce establishment rates and slow growth rates of fall- and spring- emerging horseweed.

For the past several years, we have been investigating cover crop management strategies to optimize horseweed suppression. Our initial efforts compared different cover crop species and mixtures (grass, legumes, brassicas) that were seeded in early-Sept and are applicable to cover cropping windows after a small grain or after corn silage in warmer regions of Pennsylvania.

We observed a 45 to 85% reduction in the size of horseweed populations at the time of pre-plant applications across cover cropping tactics and years relative to our fallow control. We also observed a significant reduction in the size (i.e., diameter) of horseweed rosettes, which may have resulted from reducing the number of fall-established plants or reducing growth rates of both fall and spring emerging plants.

Our current field research builds on these previous studies and remains focused on cover cropping goals for herbicide resistance management. Teala Ficks, a graduate student in Agronomy, is evaluating the impact of rye seeding rates on horseweed suppression and summer annual weed dynamics.

Most growers are using lower cereal rye seeding rates (45 – 90 lb/ac) to keep input costs down, but it is generally assumed that higher seeding rates increase weed suppression levels. We are exploring rye seeding rate effects in a planting green scenario, where we roll-plant Xtend soybean and then terminate cereal rye one day after planting using a burndown herbicide program. In our first year, integrating cereal rye reduced horseweed populations by 80% at the time of planting (Figure 1).

Seeding rate had no effect on total cereal rye biomass production, horseweed suppression levels, or soybean yields. The lack of seeding rate effect on biomass production may be attributed, in part, to an extended fall growing season in 2018, coupled with adequate residual soil fertility since we followed a soybean crop.

We are replicating the study in 2020 at Rock Springs and Landisville, PA and expect that different soil-environment conditions may yield different results. Finally, our previous work highlighted the need to investigate herbicide control strategies within a fall-sown cereal rye cover crop because complete horseweed suppression is rarely observed. Consequently, we are also currently investigating fall- and spring- herbicide options for horseweed control within a cereal rye cover crop. 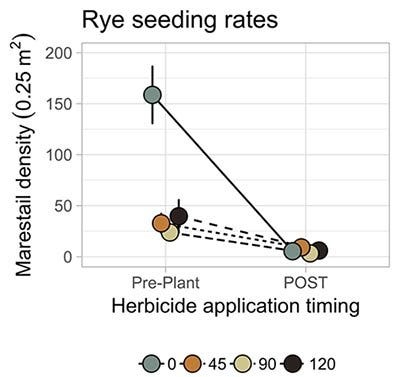 Figure 1. The effect of cereal rye seeding rates on horseweed (or marestail) density just prior to soybean planting (May 19) and a POST emergence herbicide application (5 WAP). Cereal rye was no-till drilled in early October.