Considerable research has evaluated the fate of herbicide intercepted by crop residue present on the soil surface in conservation tillage systems. Agricultural Engineers at Iowa State determined 70-90% of preemergence herbicides was washed off corn residue with 2.7 inches of rain, with the majority coming off in the first 0.6 inch of rain. There were small differences in washoff of different herbicides. This research indicates that herbicide interception by dead plant material isn’t a major concern.

While herbicide interception by dead plant material isn’t a major concern, interception by living plants could be a concern. Weed scientists at the University of Missouri studied how cover crop termination timing affected the quantity of sulfentrazone reaching the soil. Several cover crop species were established in the fall, and a combination of 2,4-D and glyphosate was applied either 21 or 7 days before soybean planting to terminate the cover crops.

Authority Maxx (sulfentrazone plus chlorimuron) was included in the burndown mixture to provide residual weed control. The concentration of sulfentrazone in the upper five inches of the soil profile was measured immediately after application and throughout the growing season to determine the impact of interception by cover crops on the availability of residual herbicides. 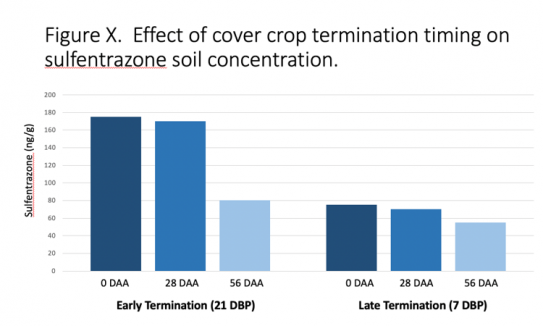 Unfortunately, many fields have uneven stands of cover crop where there are areas with insufficient cover crop biomass to control weeds. Due to the risks of escaped weeds and increased selection pressure for herbicide resistance associated with total postemergence programs, including a residual product in fields lacking uniform stands of cover crops will be necessary.