Waterhemp’s rise to the Cornbelt’s worst weed is one of the Cornbelt’s more fascinating weed-related events over the past 40 years.  Waterhemp (Amaranthus tuberculatus) is native to the United States but is a relative newcomer to crop fields. Prior to waterhemp’s ascent, redroot pigweed (A. retroflexus) and smooth pigweed (A. hybridus) were the pigweed species most commonly found in crop fields.

Pammel described redroot pigweed as abundant in every Iowa county, whereas he stated waterhemp (A. tuberculatus) was found along water courses and marshes, and concluded the plant was “not long present in well cultivated fields”.

This paper will briefly describe the history of the pigweeds in the region, and discuss the management and genetic factors that accompanied the change in waterhemp’s behavior as a weed. I use the term ‘weedy waterhemp’ to describe the biotypes that currently plague agricultural fields.

Worldwide there are more than 60 species in the Amaranthus genus, many are considered weeds. The Vascular Plants of Iowa lists nine Amaranthus species in Iowa.  Among Iowa’s pigweeds were two waterhemp species, A. tuberculatus and A. rudis.

Waterhemp was not considered a significant agricultural weed until the early 1990s.  At the 1982 NCWSS annual meeting no abstracts referenced waterhemp, whereas in 2003 there were 29 citations (Table 1). Only a few papers in agronomic or weed science journals investigated waterhemp prior to 1980.

While weed scientists paid little attention to waterhemp until the 1990s, J.D. Sauer, an authority on Amaranthus taxonomy, stated the western bioype of waterhemp was invading crop fields as far east as Indiana as early as the 1950s.

It is likely that waterhemp was present in crop fields prior to the 1980s, but rarely reached economic infestations and thus was not a focus of weed science research. 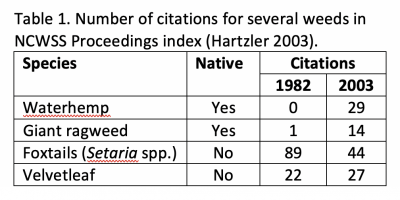 In 2003 I asked extension weed scientists in the North Central region to estimate when waterhemp became a significant problem for farmers in their state (Figure 1). I recently did the same for colleagues in the eastern Cornbelt in order to complete the map.

Ground zero for ‘weedy’ waterhemp was central MO and west-central IL, and the weedy biotype seems to have radiated across the region from that area. 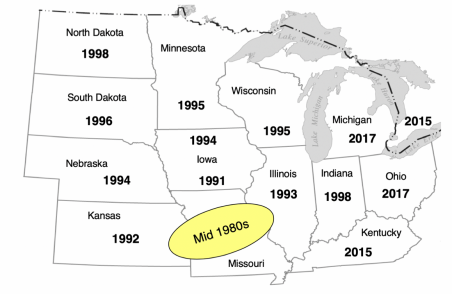 The 1980s were a period of rapid change for agriculture in the region, and several factors likely contributed to waterhemp’s evolution into a serious agronomic weed. Increases in farm size, fuel prices, and concern over soil erosion resulted in the adoption of conservation tillage.

Waterhemp is best adapted to systems with less aggressive tillage where the majority of its seed remains near the soil surface. In Iowa, farmers continued to use interrow cultivation on the majority of corn and soybean acres until the mid-1980s. Layby cultivation is an excellent control strategy for late-emerging weeds such as waterhemp.

The reduction in tillage, both pre- and post-plant, created a better environment for waterhemp than existed previously, and likely contributed to an increase in waterhemp populations.

In addition to changes in tillage, the 1970s and 80s were the golden era of herbicide discovery. Farms became much more reliant on herbicides during the 1980s, and waterhemp is extremely well adapted to this control tactic.

Waterhemp became a problem in southern Iowa about three years prior to northern Iowa. Mike Owen and I attributed the arrival of weedy waterhemp in southern Iowa to the popularity of Extrazine (cyanazine + atrazine) in that part of the state. In northern Iowa, farmers relied more on Group 15 herbicides and dicamba than Extrazine, and those products were more effective on pigweeds.

While reductions in tillage and changes in herbicide use undoubtedly contributed to the increased problems posed by waterhemp, they don’t explain the expansion pattern of weedy waterhemp across the Cornbelt.  Waterhemp is native to the entire region, thus if changes in production practices were the sole cause of the weedy biotypes it seems they would have appeared randomly across the region, rather than the observed migration pattern.

In addition, no-till is much more common in the eastern part of the Cornbelt than Iowa. If reduced tillage was a major factor in the weediness of waterhemp, it seems weedy waterhemp would have appeared earlier in Indiana and Ohio than in the west.

Genetic analysis of weediness in waterhemp

It is difficult to explain the spread of weedy waterhemp based on crop production practices alone. Sauer suggested the increased weediness of waterhemp was due to the movement of the western biotype across the Mississippi River, resulting in hybrids between the western and eastern species. Sauer stated the waterhemp hybrids were better adapted to agricultural fields.

The authors speculated that waterhemp may have acquired traits from a different Amaranthus species, and that the new traits facilitated expansion of waterhemp’s range from riparian habitat to agricultural fields.

Waselkov and Olsen evaluated the genetics of waterhemp populations across its range, looking for evidence of hybridization between the two biotypes as Sauer had proposed.

They concluded that the spread of weedy waterhemp is due primarily to the eastward movement of the western biotype that is better adapted to agricultural fields.

A recent paper evaluated the spread of glyphosate-resistant waterhemp in the US and Canada. Their genetic analysis supports the presence of the two regional biotypes and the eastward movement of the western biotype that has weedy tendencies. In addition, they reported multiple origins of glyphosate-resistant populations in Ontario.

One population originated from transport of the US-based western biotype into Ontario, likely through movement of contaminated equipment or animal-based seed dispersal. A different glyphosate-resistant waterhemp was identified that evolved independently, evolving within the local, eastern biotype of waterhemp.

Changes in crop production and migration of the western biotype with weedy tendencies have contributed to the problems posed by waterhemp, but it seems some other, still unknown, factor must be involved based on how weedy waterhemp has spread across the region.

Sauer reported the western biotype was found as far east as Indiana in the 1950s, but waterhemp wasn’t considered an agricultural problem in Indiana until the late 1990s. While a delay between introduction of an exotic invasive plant and the time the plant becomes a problem is common, is this likely for a native species?

Perhaps a variant of the western biotype originated in the area of MO/IL where waterhemp first posed serious problems, and this agriculturally adapted biotype began to spread across the region in the 1990s. The combination of prolific seed production, prolonged emergence, persistent seed, and propensity for herbicide resistance creates a formidable foe.

While all the causes of waterhemp’s rise to success are not fully understood, it is clear waterhemp is ideally suited to the production system that dominates the Cornbelt.

Acknowledgements: I appreciate my extension colleagues willingness to estimate date of weedy waterhemp’s arrival in their state.  If I recall correctly, Dr. Loyd Wax, University of Illinois, provided the information regarding the region of MO and IL where waterhemp first became a significant agronomic issue.  Dr. Pat Tranel (Univ. Illinois) developed a much ‘cleaner’ version of the map than my original.