The wet spring has been frustrating for a lot of farmers to get crops planted. One consolation with the late start is that there are several weed-control benefits of delayed planting.

The primary benefit of delayed planting is that many of the early-emerging weeds will have emerged so they can be taken out with tillage or an effective burn-down prior to planting, assuming the weeds have not gotten too large yet.

Control early-emerging weeds with tillage or an effective burndown

A series of research studies have been conducted at the University of Minnesota investigating how delayed planting dates can enhance the control of herbicide-resistant giant ragweed. Giant ragweed is one of the earliest-emerging weeds in Minnesota, with 90% of seedlings emerging before June 1st.

Tillage prior to planting effectively controls giant ragweed seedlings, providing up to 90% control of giant ragweed when tillage and planting occur in early June.

Tillage prior to crop planting can also improve control of other herbicide-resistant weeds that emerge early in the growing season, including lambsquarters, common ragweed, and kochia, all of which have substantial emergence prior to June 1st.

Figure 1 illustrates the predicted weed emergence of key species in southern Minnesota in 2019 up until the start of June. These predictions are based on actual growing degree day (GDD) accumulation in southern Minnesota and weed emergence models. As can be seen in Figure 1, by May 31, early-emerging weeds like giant and common ragweed are nearing the end of their emergence period, while lambsquarters is nearly 50% emerged.

Fields that are tilled and planted this week will likely have significantly-reduced ragweed pressure, so weed control should focus more on weeds that emerge later in the season. Weeds that survive tillage can be more difficult to control later on, so scouting should be continued in heavily-infested areas to ensure weeds were in fact controlled with tillage. 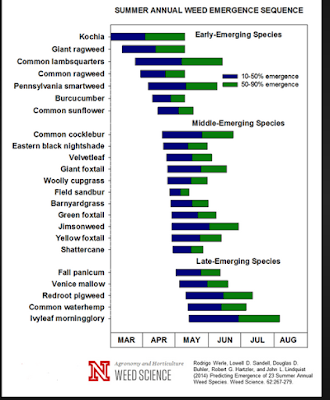 For late-planted fields, control of pigweeds such as waterhemp should be a primary focus, as waterhemp is just beginning to emerge in southern Minnesota once we get into June (Figure 1 above).

It is important to note that waterhemp has developed widespread resistance to glyphosate (Group 9), ALS inhibitors (Group 2), and PPO inhibitors (Group 14) in Minnesota, limiting control options with some burndown and postemergence herbicides. This should be taken into account in late-planted fields, as planned burndown applications may not be effective on waterhemp.

PRE herbicide should still be used at planting to manage waterhemp populations. Delayed planting can also have several benefits for PRE herbicides, as the later application timing will make them more effective at controlling later-emerging weeds like waterhemp and other pigweed species.

One of the issues with late planting, however, is that canopy closure will be delayed, which can lead to late-season waterhemp escapes. It is important to continue scouting these fields and consider applying an additional residual herbicide with the planned POST application.