The planting season is slowly underway and plans may be in place, but they may need to be adjusted if you haven’t matched the right herbicide to the weeds you have or if the weather makes it impossible to get all your preemergence herbicides on. First, you need to know which weeds are in your fields and whether they are resistant to certain herbicides or not. Then you should make sure you have chosen the right herbicide(s) to do the best job on those weeds.

Understanding the effective sites of action (SOA) of herbicides is an important part of this process. In other words, which weeds will they control?

Unfortunately, the glyphosate era of weed control made chemical weed control too easy, as glyphosate provided effective broad spectrum control of many weeds in many different crops. Overreliance on glyphosate brought herbicide resistance and the “easy” era came to an end. During this less complicated era, it was easy to forget which herbicide SOAs provided control of specific weeds.

To demonstrate just that – which weeds does each herbicide component control or not control – a soybean SOA trial of preemergence herbicide premixes and their components was conducted at Rochester, MN in 2018. While giant ragweed wasn’t included in the SOA trial, its control is highlighted in the state trials in the second section of this article.

What did the SOAs show us?

Zidua Pro components are SOA 2, 14 and 15 herbicides. The Pursuit (SOA 2) component is weak on waterhemp as expected, due to resistance. But, it is very effective on other broadleaves and grasses. Sharpen (SOA 14) does not control grass. Zidua (SOA 15) provided good weed control; however there were velvetleaf and lambsquarters escapes. Together these components functioned very well. 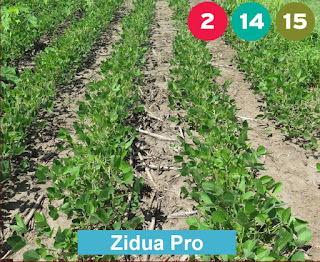 Authority First contains SOA 2 (FirstRate) and 14 (Spartan) herbicides. What was eye opening was how well these two components controlled weeds together compared to individually. Both missed key weeds: FirstRate was weak on waterhemp and Spartan missed grasses and velvetleaf.

Two SOA 2 herbicides (FirstRate and Pursuit) in the trial demonstrated similar weed control activity. Both were ineffective on waterhemp yet controlled grasses and common lambsquarters. In contrast, two of the SOA 14 herbicides (i.e. Reflex vs. Sharpen) demonstrated differences in control. Reflex provided much better control of the grasses and somewhat better control of velvetleaf than Spartan. 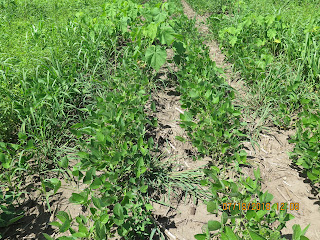 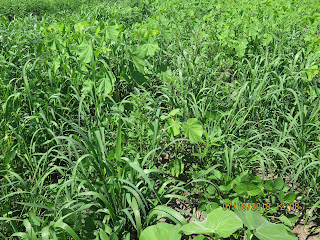 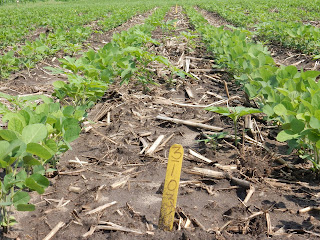 Authority Supreme treatment as it was rated

Giant ragweed is also an important weed to control, especially in southeastern Minnesota. Preemergence herbicide effectiveness against giant ragweed, common lambsquarters and common waterhemp was evaluated in statewide weed management trials and results from the Rochester location are highlighted here.

In the following tables from the 2018 and 2016 trials, you will see comparisons of several different preemergence herbicides and their early season control of giant ragweed. All of the herbicide systems in these tables provided excellent control of both common lambsquarters and waterhemp (data not shown).

These are by no means all of the herbicide combinations that you could use, but these tables will give you a good snapshot of some of the strengths and weaknesses of different preemergence herbicide systems on giant ragweed. For example, Authority Supreme was weak on giant ragweed (Table 1), whereas Prefix, Warrant Ultra and Authority First/Sonic provided over 90% control in the 2018 trials.

In the 2016 trials, conditions were a bit different and Surveil was the strongest against giant ragweed at 89% control. None of the herbicide treatments provided control over 90%.

Herbicide rate also made a difference in effectiveness. Giant ragweed control was 10 percent greater with Authority First/Sonic at a 6.4 oz/a application rate than at the 4.5 oz/a. If you have a very dense population of giant ragweed on your farm, improving control and reducing weed density by an additional 10% will help the postemergence program clean up the remaining giant ragweed in your field. This is especially critical where herbicide resistance is an issue.

Several herbicides are weak on giant ragweed, so not good options in fields where it is the primary weed. For example, Broadaxe and Boundary provided excellent control of small seeded broadleaves like common lambsquarters and common waterhemp along with many grasses, but were very weak on giant ragweed.

Using a preemergence herbicide program in soybeans lays a good foundation for weed control. There are many choices available and knowing which weeds each controls will help build a more successful program.

Table 2. Early season control of giant ragweed with preemergence herbicide systems at Rochester, MN, 2016. Treatments were applied on May 18 and weed control was rated on June 10, 2016.