Weed populations are constantly shifting, in response to the pressure from our cultural and herbicide use practices, and how good our management of weeds is (or isn’t).  Two weeks ago in CORN, we wrote about the apparent decline in marestail in parts of the state, although in subsequent communication we heard fairly clearly that not everyone’s populations had declined yet.

And there is bad news – waterhemp is spreading at a rapid rate, and it’s a considerably more challenging pest than marestail for several reasons.  The question really is – why has waterhemp taken off over the past several years?  And not Palmer amaranth which we were more worried about?

The difference may be is the initial source of the infestations as much as anything.  We did not know of any Palmer in the state prior to 2011 when we became aware of an infestation near Portsmouth.  We think of Palmer as still coming almost exclusively from distinctly new introductions, deriving from outside the state.  There are several areas where it’s being moved by farming operations from one field to another, but primarily it’s new infestations via one of the following: purchase of used harvesting equipment that came from outside Ohio; contamination of seed used for establishment of wildlife, CREP, and similar areas (possibly some cover crop seed also); feed containing cotton byproducts that were brought in from the South, or hay brought in from farther west (e.g. Kansas).

Palmer amaranth is actually a relative success story for all of us here in Ohio.  While we have had some introductions, it really has not gained much of a foothold, and is not moving around.  The growers experiencing those introductions have taken the threat seriously and worked to stop Palmer in its tracks, with the help of their local community in some cases.

In contrast, we have always had some waterhemp in the state, although it was initially concentrated mostly in west central Ohio.  We got word about it in other parts of the state occasionally prior to 2010, but it did not seem to get out of hand.  Our thinking is that when we reintroduced residual herbicides into soybean herbicide programs to help control marestail, this also helped keep waterhemp in check for a while.  The end result was that it just took longer for waterhemp in Ohio to develop the multiple herbicide resistance that has been present in waterhemp farther west for a while.

However at this point our limited sampling indicates that, in the areas waterhemp has inhabited the longest, much of it is resistant to ALS inhibitors (site 2), glyphosate, and PPO inhibitors (site 14).  We expect this to occur in other areas as well, and with continued selection, resistance to other sites of action will occur as well.  Waterhemp populations in Illinois and Missouri can have resistance to most of the following sites of action – 2, 4, 5, 9, 14, 27 – and resistance to site 15 herbicides is also developing.

Back to the original question about why waterhemp is expanding rapidly now, resistance is certainly part of it.  Although it may have taken longer for multiple resistance to develop here in Ohio, it’s impact is being felt now and there are fields where lack of control is resulting in waterhemp survival and seed production.  And we had enough waterhemp to begin with that this is survival is npw happening independently at around the state.

So while we may have some introductions of waterhemp from outside Ohio still, we have enough Ohio-born waterhemp populations going to seed at enough locations to cause an increased threat.  Put another way, increased amounts of waterhemp seed are now moving around within Ohio via all of the methods that seed usually move – equipment, animals, water, UFO traffic, etc.

And waterhemp produces a LOT of seed.  Up to a million or more seeds per plant, depending upon plant size and date of emergence.  When a few plants start going to seed in a field because they were resistant to the herbicides used, or because they emerged after all controls had been applied, or just because it’s a tough weed to completely control, the impact can be substantial.

The first year of a major waterhemp or Palmer infestation is often going to lead to a second with similar problems, based on the time it takes a grower to understand the control measures needed.  Some examples of this are shown in the figures below – comparing “pigweeds” (waterhemp and Palmer), marestail, and giant ragweed.  The effect of adding a year of corn, or getting inadequate control in soybeans, or an increasing frequency of resistance are shown in successive figures.

Once control in soybeans drops (not uncommon), the pigweed seed production skyrockets – showing the importance of a zero-tolerance for pigweed escapes. 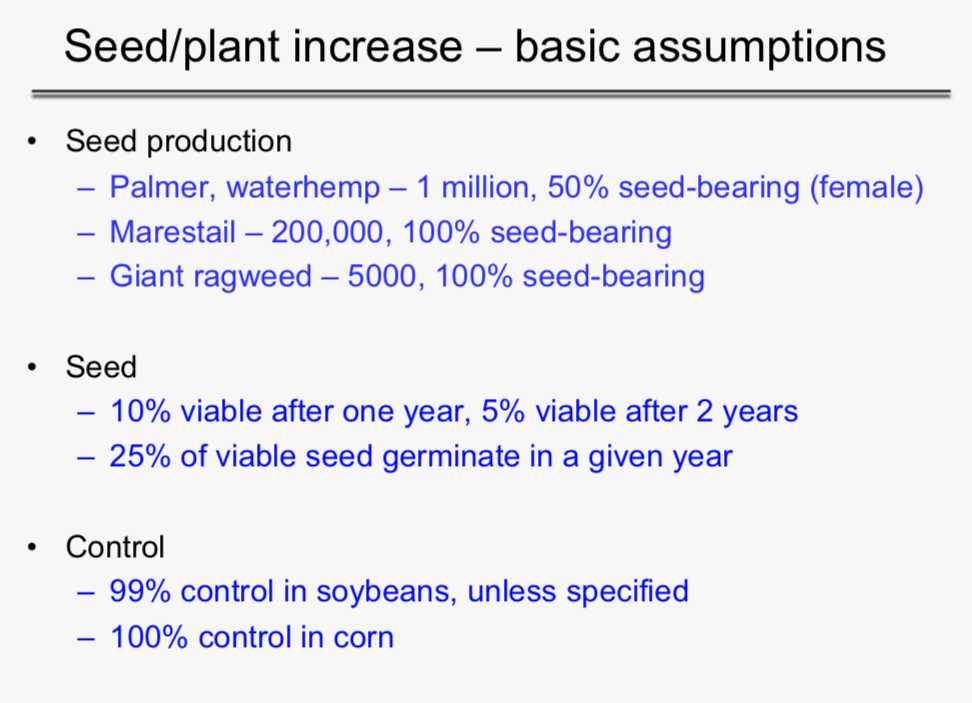 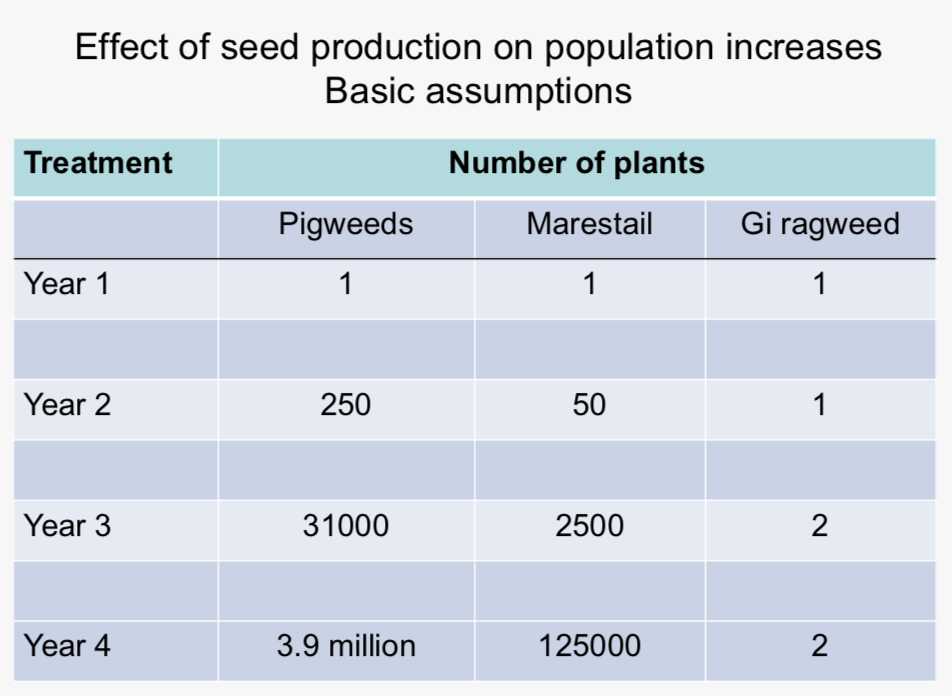 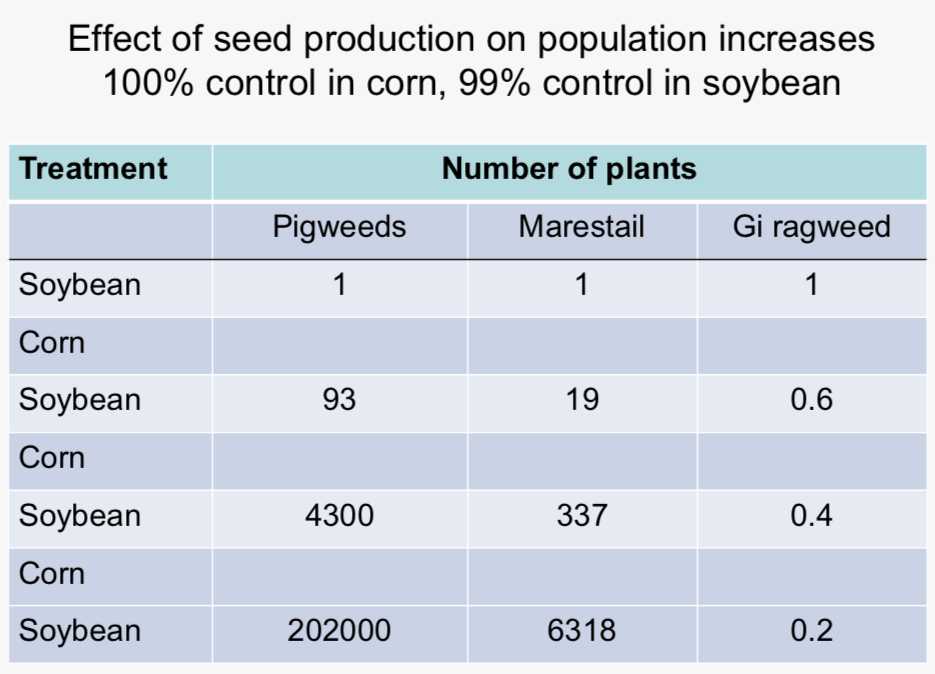 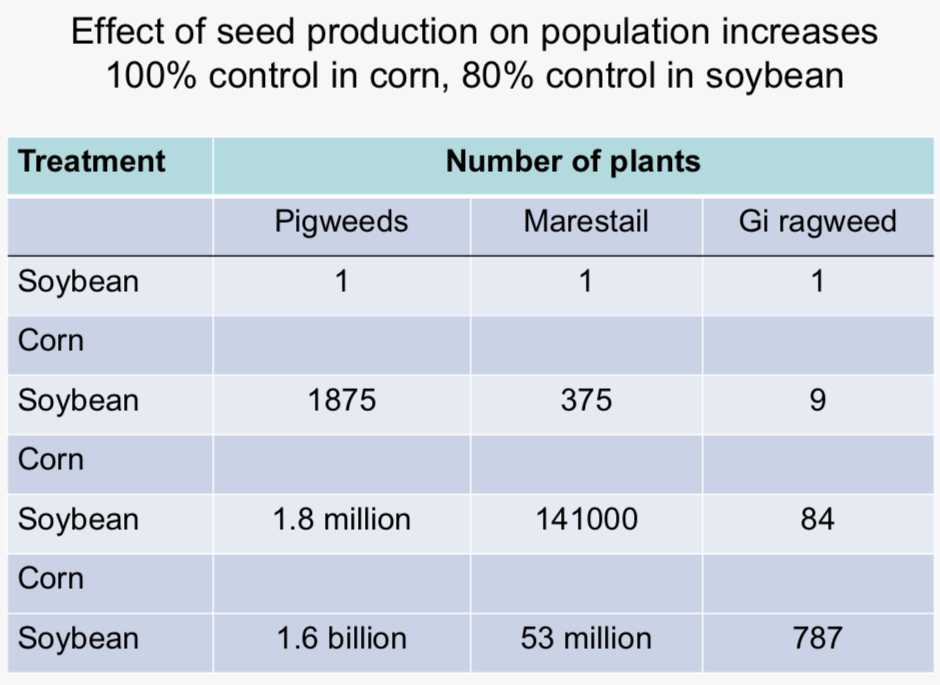 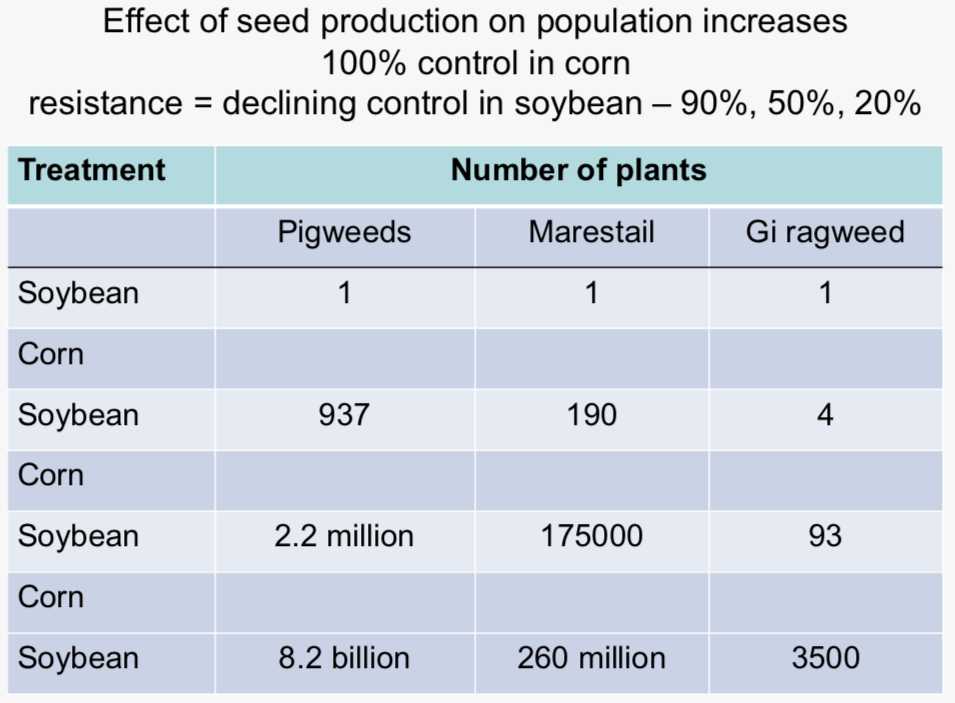 The grower experiencing this seed increase is likely to spread the seed by combines within that field, and also to other fields.  We currently have an increasing number of waterhemp infestations across Ohio, which are capable of producing lots of seed, which can then move any way that weed seed moves.  Overall this makes waterhemp a more immediate and more widespread threat than Palmer amaranth.  Not that we should let our guard down on Palmer either.

As we stated a couple weeks ago, one of the characteristics shared by marestail, giant ragweed, and the nasty pigweeds, waterhemp and Palmer amaranth, is a rapid decline in seed viability in the soil within the first year, and an overall decline to 5% or less viable seed within 3 to 4 years.

Another characteristic of marestail and pigweed seed is a relative lack of dormancy, which results in the potential for an almost immediate increase in population the year following a year of substantial escapes and seed production.  The net result of these two characteristics is that these weeds can ramp up population fast following a year of poor, but populations can also decline rapidly with good control that prevents seed.

The hitch is that over that four to six years when we are working to drive waterhemp seedbanks and populations down, it is developing resistance to whatever we are using to control it.  So about the time we get the population reduced, it has the potential to increase again when the herbicide being used fails to control it.  The million seed per plant figure means this increase can occur rapidly, and populations in effect yoyo up and down over time, continuing to develop resistance to additional sites of action.

Bottom line – when we are trying to manage species that: 1) can produce upwards of one million seed per plant; 2) can develop resistance to a herbicide site of action after three seasons of use; and 3) where a single mutation can simultaneously confer resistance to more than one site of action, then:

In the end, it’s not possible to manage a species that is so good at being a weed with herbicides alone.  More information on waterhemp and Palmer amaranth can be found on the OSU Weed Management website.