Less is known about many aspects of metabolism-based resistance than with target site-based resistance, and in-depth papers detailing the newest resistance cases have yet to be published. Thus, some of the information below is speculation on my part.

Herbicide metabolism is typically described as a three-phase process, although some herbicides don’t require the first step (Figure 1). Phase I involves a slight modification of the herbicide molecule which predisposes it to further modification. Phase II involves combining the modified herbicide with another compound (sugar, glutathione, etc.) that facilitates the final step. Phase III involves transport enzymes that move the herbicide into the cell vacuole (often described as a cell’s garbage can) or outside of the cell into the intracellular space.

Both plants and animals use the same enzyme families for these processes (Table 1), but plants typically have more versions of these enzymes than animals. For example, rice has more than 360 genes for cytochrome P450  enzymes (Phase I reactions), whereas humans have less than 60.

The large number of genes allows an organism to process a wide variety of molecules. Plants probably have more genes for these enzymes than animals since they have less ability to control their exposure to toxins. Animals can modify their diet to reduce the intake of toxins, or physically leave areas with toxins – plants don’t have these options.

The major difference between detoxification of chemicals in animals and plants occurs in Phase III. As mentioned, plants store the modified herbicide in areas where it doesn’t pose a threat. In animals, Phase II reactions increase their ability to filter toxins from the blood via the kidneys. After removal of the herbicide from the blood, the compound can be excreted from the body via urine.

If you’ve ever wondered why waste of animals fed forage from areas treated with picloram (Tordon, Grazon, etc.) or other persistent Group 4 herbicides can result in injury to sensitive crops, this is why.

Why should we be concerned about metabolism-based resistance?

Nearly all of Iowa’s herbicide resistance problems prior to 2005 were target site-based (Table 2). Most involve a simple alteration to the site of action that reduces binding of the herbicide to the target site. Glyphosate resistance in waterhemp is due to overexpression of the target site, which dilutes the effect of glyphosate. 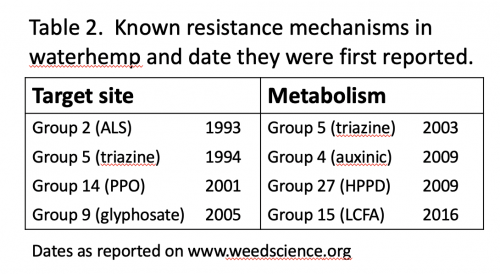 This is well documented in Australia; widespread metabolism-based resistance has led to the development of harvest weed seed control and other alternative weed management strategies.

Metolachlor and 2,4-D resistance in other weed species has been linked with increased activity of cytochrome P450. It is possible, if not likely, that the genes providing resistance to the Group 27 herbicides are responsible for the new resistances in the recently identified populations.

It is critical to develop herbicide programs that: 1) rely on multiple effective herbicide groups, and 2) provide full-season control. However, herbicides alone cannot win this battle. Production systems must be evaluated to determine what alternative strategies can be used to supplement herbicides.

While strategies such as increased crop competitiveness via narrow-row spacing or planting cover crops do not provide the ‘big impact’ of herbicides, their contribution to suppressing weeds can make the difference between long-term success or failure in weed management.