Nine years ago, York wrote that glyphosate-resistant Palmer amaranth had the potential to become the most serious problem facing cotton producers since the boll weevil (2007 Cotton Information). That prophetic prediction has certainly come to pass.

By necessity, not choice, growers have stepped up to the plate and adopted resistance management strategies that have been promoted since discovery of glyphosate resistance in Palmer amaranth in 2005. They have made significant progress in getting resistant Palmer amaranth under control, but it has not been easy nor economical.

The resistant weed has significantly increased complexity of weed management and increased herbicide input costs by $30 to $65 per acre.  And that does not include the hand-weeding costs that many growers have incurred.

One of the cornerstones in programs to manage resistant Palmer amaranth has been reduction in the seed bank. This weed is a prolific seed producer; one-half million seed per plant is common.  In some research during 2014 and 2015, we occasionally found plants growing in cotton that produced over one million seed.  Obviously, with this magnitude of seed production, we are going backwards anytime we let a few escapes mature.

To say the least, 2015 was a less than stellar year for cotton production. Overall, we had a good crop until the fall rains set in.  Yields and grades deteriorated quickly.  So, we are coming out of a bad production year and starting a new year with disappointing price prospects.

Growers need to reduce production costs wherever possible, and with the current costs of weed management, that is a logical place for growers to try to trim.  For most growers, however, there is not much they can do to reduce weed management costs without jeopardizing the investments in previous years to reduce the seed bank.

The table below shows what we promote to manage glyphosate-resistant Palmer amaranth and to avoid selection for further resistance. Yes, the programs are expensive, but that is what it takes to handle the problem.

Regardless of the tillage system, we encourage growers to start the season clean. Small, recently emerged Palmer is hard to see from the tractor cab or pickup window.  Nevertheless, the tiny weeds present at planting will quickly become a problem. In no-till or strip-till, paraquat included with the PRE herbicide is generally a good idea.

It is better to be too early than too late.  By the same token, timing of the second POST application may be adjusted, but target Palmer amaranth no larger than 3 inches.

A layby directed herbicide is recommended in the table below. We acknowledge that layby applications are slow and tedious.  Many growers, especially once they get the Palmer amaranth seed bank reduced, have been able to forego the layby application.  However, for moderate to heavy infestations, we still feel the layby application has a place.  It not only burns down emerged weeds, but also gives additional residual control.  In the absence of a layby, it becomes more important to include a residual herbicide in both POST applications. 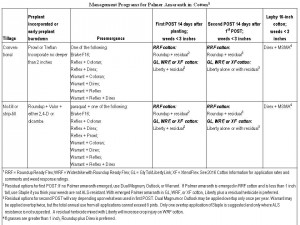