Glyphosate-resistant Palmer amaranth (Amaranthus palmeri) and waterhemp (Amaranthus tuberculatus) continue to spread across Kentucky. Initially these pigweed species were thought to be present primarily in the west end of the state (Purchase area and along the lower Ohio River region), but have now been found in over 50 counties throughout Kentucky. These sightings would indicate that Palmer amaranth and waterhemp continues to be a growing threat to grain crop production within the state.

It appears that the introduction of these weeds on farms have come from a variety of sources. The seed size is extremely small which allow seed to be easily spread. It is known that some Palmer amaranth seed was introduced when cotton seed hulls were fed to livestock and the subsequent manure spread on crop fields.

Other possible routes for introduction can be from purchasing used combines, headers and farm equipment from other states; trucks hauling supplies from the southern regions of the US where Palmer amaranth is widespread or the Midwest where waterhemp is more prevalent; or transport of farm equipment from farm to farm. Another source appears to be through planting cover crop seed that is not inspected or cleaned of unwanted weed seed. 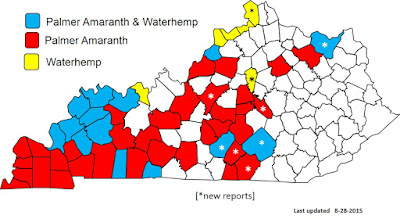 Unfortunately, it is easier to find Palmer amaranth and waterhemp populations in grain crops later into the season after the plants have begun to produce new seed. Unlike the more common pigweed (Amaranthus hybridus) found in Kentucky, Palmer amaranth and waterhemp have smooth stems and often a longer seedhead. However, it can often be very difficult to distinguish between these two Amaranth species.

If you notice a plant that has the general appearance of a pigweed, but looks somewhat different, you may need to confirm its identification. You can contact your local county extension office for assistance or to report its occurrence.

Detecting the presence of these weeds before large populations become established in crop fields can help minimize a larger economic impact in the future. After Palmer amaranth or waterhemp become established they can be very difficult to control because many populations of this plant are already resistant to glyphosate and the cost for weed control in these crops can more than double.

When only a few plants are spotted in a field it can be worthwhile to physically remove and destroy these individual plants. Fields or portions of fields with large infestations may justify destroying plants by mowing or tillage in order to limit the production or spread of seed.

Growers who plan to harvest these heavily infested areas would be advised to combine these areas last to minimize the introduction of new seed into other fields. Furthermore, an attempt to clean the combine, grain carts, trucks, and other equipment used to destroy or harvest the crop would be advised, but will not be easy since the small round seed size are not much bigger than a period.